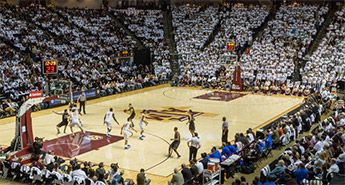 Reed Arena serves as the home for Texas A&M men’s and women’s basketball teams. Camp will be held on both the main arena floor, as well as the auxiliary gym. The arena opened in 1998 and has a maximum capacity of 12,500. Complete with the amenities of a NBA arena and the atmosphere of a collegiate setting, Reed Arena provides A&M with one of the best basketball arenas in the southwest and first class accommodations for Aggie Basketball. 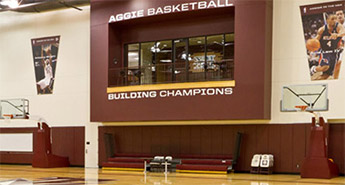 The 68,000 square foot Cox-McFerrin Center for Aggie Basketball is the home for both the men’s and the women’s teams, giving both a state-of-the-art basketball facility directly adjacent to Reed Arena.

The design is a three-level addition, with the lowest level (even with the playing floor of the arena) containing training facilities, team locker rooms, coach’s locker rooms, and players’ lounges allowing quick and easy access to the competition court in Reed Arena. The second level contains two court-and–a–half practice gyms, weight room and weight training coach’s offices and mechanical rooms that serve the entire building. The two 12,000 square foot practice gyms feature a maple hardwood court six basketball goals of the same type as used on the Competition Court, a full size NCAA regulation size court and two high school size cross courts. This combination of court sizes and markings allows for a multitude of practice scenarios and tasks to be accomplished by the teams and coaching staffs. A full court practice can occur on the NCAA court while at the same time players can be working on rebounding techniques on one of the cross courts while on the other, players can be working on three-point shooting or free throws. In addition, a sound system allows for coaches to speak to large high school camp groups hosted by the programs and for student athletes to play music while they do individual shoot around including the ability for the players to plug in their own MP3 player or IPod into the system to player their own recorded music. The concourse level of the facility provides offices for both men’s and women’s teams and the Carolyn and Tommie E. Lohman ’59 Grand Lobby. The offices are all equipped with wall mounted flat-panel TVs which can watch a variety of media sources including local programming, national sporting networks, and A&M’s own network and can view tapes of previous A&M games or upcoming opponents’ previous games. The Lohman Lobby features trophy cases and a maple wood floor to simulate the basketball court wood floor.

Opened in 1995 at a cost of $36 million, The Student Rec Center remains one of the premier recreational facilities in the nation. On average, The Student Rec Center accommodates over one million patrons each year. The building consists of over 400,000 square feet. Features include multipurpose gyms, indoor soccer courts, racquetball courts, and a variety of indoor and outdoor pool facilities.

Located at the corner of Penberthy Road and John Kimbrough Boulevard, the PEAP (Physical Education Activity Program) Building is a partnership between the Department of Health and Kinesiology and Rec Sports that replaces G. Rollie White Coliseum and the Read Building.